If you’re thinking about moving to Portland, OR save this resource page

Thinking of moving to Portland Oregon?

If so, there’s a lot you need to know about this city! The first is, that although Portland is relatively small by population, it is a really spread out city & metro area. This means that neighborhoods vary greatly on architecture styles, age demographics, walkability and schools.

We have been helping buyers just like you relocate to Portland from all over the country since 2001. We understand that most buyers from other areas don’t understand the lay of the land, don’t know about commutes or traffic patterns and certainly don’t know the easiest way to get from Beaverton to Portland. We have lived in the Portland area my entire life and can assist you at quickly acclimating to the area with your transition to Portland.  We are experts in the area and can help you identify your perfect neighborhood, home style, commute, and school district.

If you are thinking of moving to Portland, let our Portland Oregon buyer specialists help you find the perfect neighborhood!

To learn more about Portland, watch my latest video. How The Portland Metro Area Lays Out

When moving to Portland there is a lot to consider.  Finding out how the Portland area flows is important.

The Portland area is divided into five rich and diverse areas. Within each of the five quadrants are unique Portland Metro Neighborhoods.

What Are the The Five Quadrants making up the Portland Metro area? 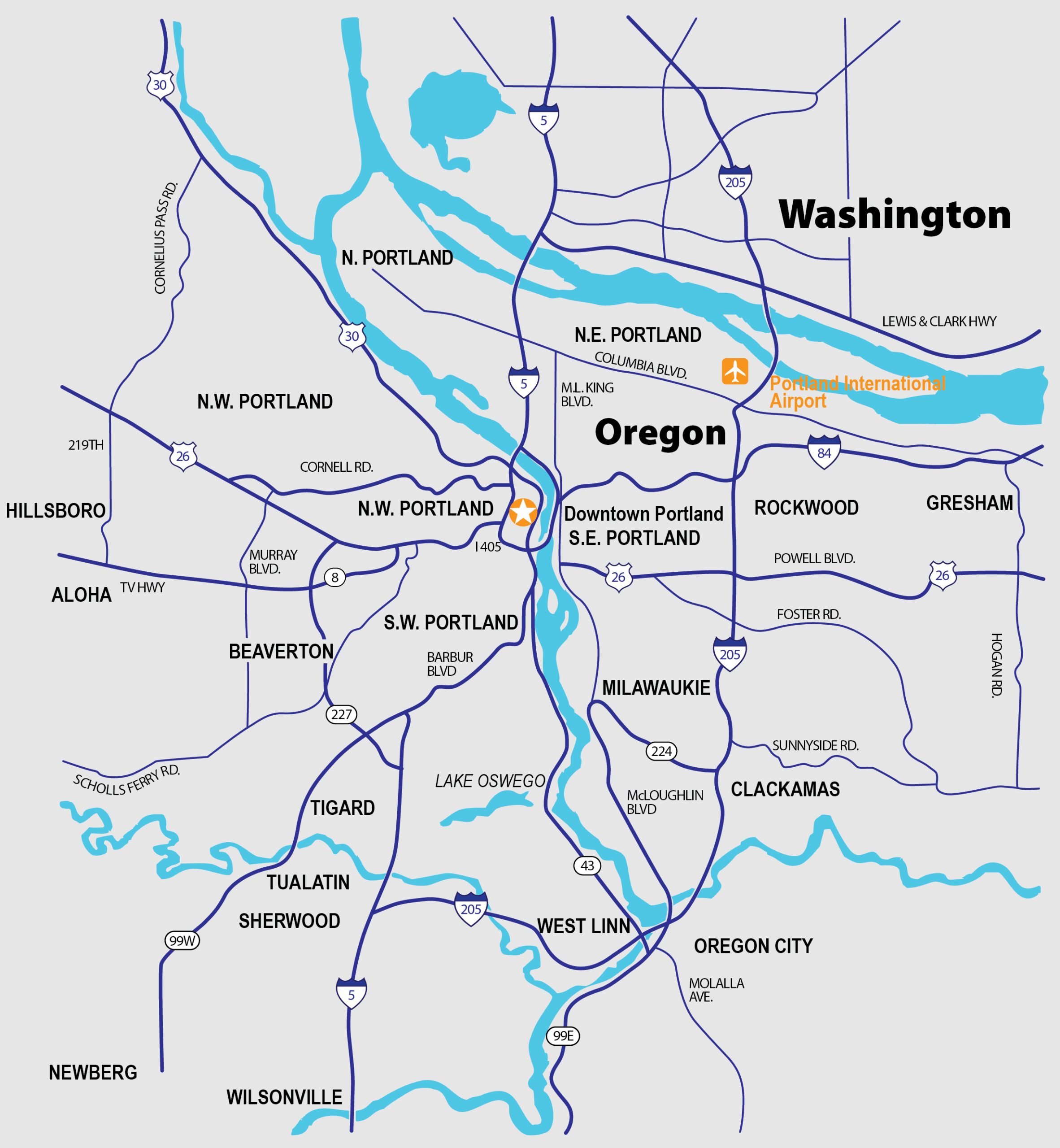 North Portland is a diverse mixture of residential, commercial, and industrial areas. It includes the Portland International Raceway, the University of Portland, and massive cargo facilities of the Port of Portland.

Slang-names for it include “NoPo” (shortened from North Portland) and “the Fifth Quadrant” (for being the odd-man out from the four-cornered logic of SE, NE, SW, and NW).

Think of North Portland as an area connected to the industrial area of Northwest Portland by the St. Johns Bridge, located at Cathedral Park.  The Bridge is a 2,067 ft long suspension bridge completed in 1931 and extensively rehabilitated in 2003-05. Northeast Portland contains a diverse collection of neighborhoods. For example, while Irvington and the Alameda Ridge feature some of the oldest and most expensive homes in Portland, nearby King is a more working-class neighborhood.

Because it is so large, Northeast Portland can essentially be divided ethnically, culturally, and geographically into inner and outer sections.

Inner Northeast PDX includes several shopping areas, such as the Lloyd District, Alberta Arts District and Hollywood, and part of the affluent Irvington, Alameda, Grant Park and Laurelhurst neighborhoods and nearby developments. The city plan targets Lloyd District as another mixed-use area, with high-density residential development.

Burnside Street, the “B” in the Alphabet Blocks sequence, divides the Northeast and Northwest quadrants of the city from the Southeast and Southwest.

The Pearl District is a recent name for a former warehouse and industrial area just north of downtown. Many of the warehouses have been converted into lofts, and new multistory condominiums have also been developed on previously vacant land. The increasing density has attracted a mix of restaurants, brewpubs, shops, and art galleries. The galleries sponsor simultaneous artists’ receptions every month, in an event known as First Thursday.

Further west is the compact but thriving NW 21st and 23rd Avenue restaurant and retail area, the core of the Northwest District. Parts of this area are also called Uptown and Nob Hill. Nicknames include Snob Hill and Trendy Third.

The residential areas adjacent to the shopping district include the Alphabet Historic District (with large Victorian and Craftsman homes built in the years before and shortly after 1900) and a large district centered around Wallace Park. The neighborhood has a mix of Victorian-era houses, apartment buildings from throughout the 20th century, and various businesses centered around Legacy Good Samaritan Medical Center.  The Portland Streetcar connects Nob Hill to downtown, via the Pearl.

West of the developed areas is the northern portion of Portland’s West Hills, including the majority of extensive Forest Park and the Willamette Heights, Hillside, Sylvan, Skyline and Forest Heights neighborhoods. Southeast Portland stretches from the warehouses along the Willamette through historic Ladd’s Addition to the Hawthorne and Belmont districts out to Gresham.

Southeast Portland has blue-collar roots and has evolved to encompass a wide mix of backgrounds.  The Hawthorne district in particular is known for its hippie/radical crowd and small subculturally oriented shops; not far away is Reed College, whose campus expands from Woodstock Boulevard to Steele Street, and from the 28th to the 39th Avenues.

Between the 1920s and the 1960s, Southeast was home to Lambert Gardens.

Southwest Portland is one of the five quadrants making up the Portland Metro Area. It is bordered on the west by I-5; on the north by I-5, SW Pasadena St., and SW Pomona St.; on the east by SW 49th Ave. and Kerr Parkway; and on the south by SW Kruse Ridge Dr. and the southern border of the Portland Community College Sylvania Campus. Outside of the main sections of Portland lie the Portland Suburbs

These are a few of the more popular Portland suburbs to live in. Be sure to explore our more detailed Portland Suburb directory page if you’re interested in moving somewhere outside of the city. Beaverton is a highly coveted suburb of Portland, Oregon. Best known for his affordable cost of living & popular things to do. The City of Hillsboro is another ‘burb which is very centrally located to the high-tech corridor of the Silicon Forest. The City of Tigard is also a lovely suburb with homes that are a little further north of the Portland Metro proper area.

No matter what your decisions might be, the Portland Oregon area is one of the nation’s best-kept secrets. From the Downtown Center City, drive due west for about one hour and hit the Oregon Coast. Not into the sand and salt-sea air? Drive about one hour due east and hit the slopes! Mt. Hood is opened yearlong. Are you into hiking, biking, and wine tasting?  We have it all!

Contemplating a relocation move to Portland, Oregon? Perhaps you’ve landed a job and are relocating due to employment related reasons? Or, maybe the affordable cost of living brings you to town, especially if you’re moving up from California, or heading west from the East Coast. You are in the right place. Portland has long been considered one of the nation’s top ten livable cities.

Currently, Portland is a leader in it’s usage of sustainable building practices in many condo projects

That’s just for starters. If you can name it, you’ll find it here or there but not very far from your reach.

Taking Pride in Helping Relocation Buyers With Their Move to Portland

When representing Buyers relocating to Portland I take great pride in ensuring a few particulars:

Facts to know prior to Moving to Portland Oregon

What's the Weather in Portland?

Anyone moving to Portland Oregon will want to know about Portland weather.  The beautiful Pacific NW is lush and green and that’s because Mother Nature leaves the sprinklers on!

The Four Seasons of Portland

Portland experiences a temperate climate with mild, damp winters and relatively dry, warm summers. Like much of the Pacific Northwest, it falls within the cool, dry-summer also referred to as cool-summer Mediterranean, because of its relatively dry summers.

If you’re moving to Portland Oregon, we have all four seasons!

The Major Employers in Portland

Most people who are moving to Portland relocate here due to job transfers or other employment opportunities.  Here is a few of the major employers in the area, in no particular order:

Entertainment and Recreation in Portland

WOW – where do we begin when it comes to entertainment and things to do in Portland Oregon?  If you’re moving to Portland Oregon here are a few things you may enjoy:

Schools in the Portland Area

Moving to Portland Oregon with children of school age requires some due diligence on the areas school districts.

If you’re moving to Portland and would like information on the private schools in the area, please let me know.

We have secular and non-secular private schools which are very highly rated.  The Oregon Department of Education keeps a yearly “Report Card” for Districts throughout the State.